Silibandia considers all information about you to be their own money-making asset.

Silibandia doesn’t want you to know about the amazing, well-proven technology and methodology called AC
AC puts YOU in control of information that identifies you.

We’re led by Wes Kussmaul, who in 1981 had launched the world’s first online encyclopedia.

In 1982 the Kussmaul Encyclopedia morphed into the Delphi social network. As the author Michael Wolff noted, Delphi was largely responsible for transforming the internet from what Wes called a “worldwide faculty club” into a place where everyone can gather, learn, and have fun

For years, many working groups have been building the components of an information infrastructure that is governed by its users, and where people are in complete control of the use of information about themselves. And for years, we at The Authenticity Institute have been working to assemble those components into a workable whole.

Back then, social media had integrity. There was no Silicon Valley megalomaniac spying on you, creating a database about who you communicated with, your purchase habits, your political affiliations, your whole digital self.

Most importantly, with Delphi you had Accountable Anonymity. Nobody got to know your name, or gender, or age, or anything else about you unless you told them, or if someone got a court order because you defrauded them otherwise injured them or broke the law.

Think about your car’s license plate. Anyone can see it, making you accountable for what happens on public roadways – but no one gets to know your identity unless there’s been an incident. With Delphi your username made you accountable, but you remained anonymous.

Delphi was sold to Rupert Murdoch’s News America corporation in 1993. Using a retained license to some of the technology, Wes then built an ISP business that was subsequently merged with another and sold to NTT Verio in 1998.

Suddenly finding himself with time on his hands, Wes started seeking an answer to the problem of lack of accountability on the new Web-based internet. When his daughter Sara, whose friend and PKI mentor was Micky Theodoridis, asked “Isn’t that what PKI is supposed to fix?” Wes replied, “yes, and here are the reasons why it doesn’t.”

For months afterward, Wes thought about his answer. Sara then introduced her dad to her i-Cube colleague Micky Theodoridis, who believed that a global consumer-and-business PKI was feasible. It occurred to Wes that that the problem wasn’t with PKI but rather with the way PKI had been deployed. So Wes began writing Quiet Enjoyment, a book about how PKI, if done right, could solve all of the major problems with the use of the internet. Micky Theodoridis had been reviewing the manuscript.

Sara, Micky and Micky’s pregnant wife Rahma were planning to attend a mutual friend’s wedding in LA on September 12, 2001. The day before, Sara had been listening to the news while preparing to drive to LAX to pick up Micky, Rahma, and their unborn child from American Airlines Flight 11.

In 2002 Wes was introduced to a group at the International Telecommunication Union, a UN agency, that was building the World e-Trust Initiative, a world PKI that resembled the one that resembled the PKI that he was advocating in his book. He was invited to join the effort as a member of the High Level Experts Group of the ITU’s Global Cybersecurity Agenda. Then, for political reasons the ITU discontinued work on the World e-Trust Initiative. At a March 7, 2005 meeting at ITU headquarters in Geneva the project was handed off to Wes’s team. On that day and in that meeting a new certification authority, taking the form of an online municipality called The City of Osmio, was chartered. 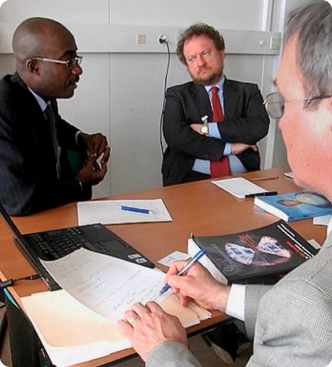 If you’re familiar with digital certification (or even if you’re not) this video will show why our certification authority takes the form of a municipality. [The Right Way To Certify]
Presenting the City of Osmio to the UN World Summit on Information Society on March 22, 2008.

The Authentiverse is built on Authenticity, also known as PKI Done Right

Authenticity™ is the condition that exists when we have

Yes! Keep in touch with me about building The Authentiverse!

Keep me posted about Authentiverse